I Love You So 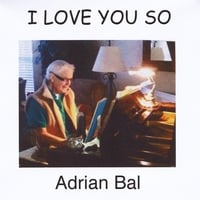 The original song, I Love You So, was written and performed by Adrian Bal on a CD by the same name. I Love You So is an upbeat, jazz, swing, adult contemporary, easy listening, pop song performed and recorded on BAL RECORDS by terrific musicians to an outstanding arrangement by Kevin L. Hiatt. The song was professionally performed and recorded on two tracks, one track with a vocal and the other track as an instrumental. The words and music for the song were written by singer/ songwriter/ performing artist, Adrian Bal, for your enjoyment.

Buy it at CD Baby 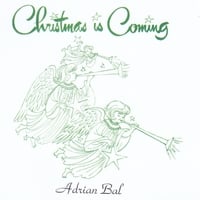 The original Holiday Song, Christmas Is Coming, writtien by Adrian Bal (music), and Berdela Bal (words), is performed by singer/ songwriter, recording artist Adrian Bal on a single CD by the same name. Christmas Is Coming is a happy, up-beat, pop song with an awesome arrangement by Kevin Hiatt. The song was written and performed to bring happiness to all ages during the Holidays. Adrian Bal started his career at an early age in New Jersey where he was born and attended school. When he was young he sang for talent shows at movie theaters. In High School he performed in musicals and had his own band. After graduating from High School he served in the Navy for three years. Since then he has taugut in High School and has continued his musical career in the Los Angelos, California, area. He has recorded and performed many of the best cover songs from the past as well as his own original music. Adrian Bal sounds similar to Frank Sinatra, Harry Conick, Jr., and Michael Buble. All of his performances and recordings hav been designed for the enjoyment of all persons. Buy it at CD Baby

All of the songs on the CD. STRICTLY INSTRUMENTAL: Jazz/Latin/Swing, have been masterfully performed by and recorded on BAL RECORDS by an outstanding group of musicians. The musical arrangements for each song is unique and fabulous. The CD contains original, easy listening, Jazz, Latin, and or swing songs written by Adrian Bal. The musicality of this CD breathes deeply with the ease of a warm summer night. Each song was professionally performed and recorded for your enjoyment. Buy "Strictly Instrumental: Jazz/ Latin/ Swing - CD" at CD Baby!

Dance and Dream With Me

Adrian Bal, artist,chose to perform the song, Los Angeles, for the CD by the same name. The artist has lived in the Los Angeles area for many years and found the song, Los Angeles, to be a beautiful, positive song about Los Angeles, California. The words and music of the song were written by Rich Martin and the song was arranged by Kevin Hiatt. The CD contains three tracks: track 1, Los Angeles sung in Spanish; track 2, Los Angeles sung in English; and track 3, the instrumental of Los Angeles. The Spanish translation of the words and the English words have been printed on the inside of the cover booklet of the CD as a convenience. Adrian Bal started his musical career at an early age. When he was young he sang in talent shows in movie theaters, usually getting first place. In High School he performed in the school musicals. He joined the Navy at age 18, serving his country in World War II until the War was over. Since then he has been continuing his music career as a singer/songwriter/recording artist in the Los Angeles, California, area. He has a terrific voice and is enjoyed by persons of all ages. Buy "Los Angeles" at CDBaby!
Download "Los Angeles" from ITunes

Spend The Holidays With Me

Adrian Bal, artist, has chosen to perform Holiday Songs that he believes are some of the best Holiday Songs written. The CD also includes two new Holiday Songs, "Christmas Is Coming" and "Yuletime", which were written by Adrian and Berdella Bal. He enjoys singing these songs, as he believes they send a positive messsage both lyrically and musicallly. He states, "I enjoy singing and I enjoy sharing this great music with others". Buy "Spend The Holidays With Me" at CD Baby!
Download "Spend The Holidays With Me" from iTunes